Thirty-six-year-old William’s incontinence started approximately three and a half years ago. At the time he was moving from Canberra to start a new life in Sydney, and so thought his constant need to urinate was a symptom of nerves and anxiety. Due to frequent urges to urinate, he gradually began experiencing leakage. 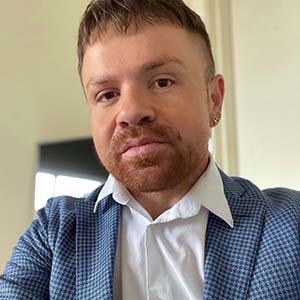 Embarrassment prevented William from seeking medical advice immediately, but after a month of trying to manage on his own, and educating himself through Google searches, he went to a doctor who referred him for an MRI and to a physiotherapist.

So far, no medical reason has been established for his urge incontinence, however William has found reducing his caffeine intake, and exercising his pelvic floor muscles has helped significantly. Keeping a bladder diary has also been an important step in helping him to develop a bladder training program.

“The biggest thing has been listening to my body, and that’s something I haven’t always been the best at. It can happen to anyone, so speak to your doctor and find someone you can confide in.”

When his continence is under control, William finds it difficult to maintain good bladder habits. However, his continence issues can interfere with the things he enjoys like power lifting at the gym and his social life.

William chose continence products with maximum security, so that he didn’t have to fear having an accident. William wants to share his story to help support others. The last few years he has been on
a journey towards self-acceptance.

“The biggest thing has been listening to my body, and that’s something I haven’t always been the best at. It can happen to anyone, so speak to your doctor and find someone you can confide in,” he says.

He wants to break the stereotype that incontinence is mainly a women’s and elderly person’s issue and is also passionate about the increased visibility of continence issues amongst First Nations people and the LGBTQIA+ community.

William’s message is to let others know that incontinence can happen to any one of us at any time. “I was being sneaky and hiding the problem because I was self-conscious. I would wear athletic tights and dispose of pads discreetly in stalls, but I was 100% determined it wouldn’t change my life,” says William.

It was a turning point for him when he went to the doctor shrouded in shame and found the doctor was very supportive and “didn’t bat an eyelid.”