When the continence expert becomes the patient 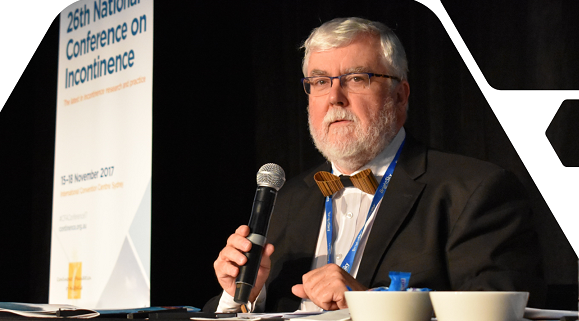 Ever wondered if your doctor or health specialist truly understands the debilitating effect incontinence has on your life? Associate Professor Michael Murray does. We spoke with him about his own compelling, very personal post-surgery story.

Michael Murray is the Medical Director of Continuing Care and Head of Geriatric Medicine at Austin Health. He is also a clinical educator at Melbourne and La Trobe universities, President of the National Ageing Research Institute (NARI) and serves on several boards including as President of the Continence Foundation of Australia. He regularly works 70 plus hours per week; seeing patients, teaching medical students and voluntarily sharing his expertise in the interests of public service.

Today, Michael is discussing his recent learnings from the ‘other’ side. He is battling the biggest health challenge of his life after being diagnosed with incurable cancer.

“Back in January, I was told I possibly only had months to live. I had a tumour in my bowel and metastases in my liver and lymph nodes. It came as somewhat of a shock as I suppose it inevitably does. The drive that evening with my wife to see my specialist was very difficult,” said Michael.

“But I wasn’t going to take that lying down. I knew I still had a lot of living and work to do. I was going to make sure that I had the best chance I could to get a few more years out of life.”

Michael sought the advice of the best medical specialists he could find. Fortunately, subsequent tests revealed a much slower growing type of cancer than was first thought and it was hoped that extensive surgery with removal of half of his large bowel, some small bowel and part of the liver would give him the best opportunity and longest survival.

“I was very lucky in the sense that I had a high level of health literacy and a wide circle of friends and colleagues who work in this field to whom I am greatly indebted. I spoke with surgeons, physios, dieticians … Most people are hard pressed to see one dietician, let alone four as I did.”

Post-surgery, Michael has had to overcome many obstacles to reach his goal to return to work.

“I tackled my rehabilitation like a full-time job. Every day, I would push my tolerance levels a little bit further, walking farther, exercising more … I had a great physio who was an old colleague who worked me hard. I was incredibly motivated to return to work.”

“Having worked most of my life in the field of continence did not lessen the shock and horror of now living with the reality of daily diarrhoea. If you had to choose about the type of incontinence you suffer from, faecal incontinence would not be your first choice. It is very difficult to contain. A well-formed poo is containable but a huge amount of liquid that comes out with ferocity, is not a great option.”

“I experienced reluctance and anxiety to leave the house. It is very difficult to prepare yourself adequately. Whilst I understood the theory and was well supported with lots of medication initially, not much works in that difficult situation.”

“I had to carefully plan my life around the availability of a toilet, taking ‘pre-emptive’ opportunity in terms of using the toilet before leaving home or indeed planning before I went anywhere a toilet wasn’t available. I quickly learnt what cafes or shopping centres had good facilities and ensured I used them at every opportunity. I needed to always carry a backpack of continence supplies; disposable pull ups, wipes, medicated cream, spare underwear … I never left home without it.”

“I think I became more difficult to live with, more irritable and grumpy and my sense of self took a bit of a nose dive. I was extremely fortunate to have great friends and colleagues. I was given a huge box of gifts; puzzle books, DVDs, books and all sorts of distractions. I had people come to take me for short walks initially up and down my street, me on my frame with my emergency supplies and they providing the world commentary. I enrolled in a cancer rehabilitation program at St Georges Hospital which was brilliant and covered sleep, exercise, diet, psychological support and no doubt contributed to my regaining my resilience.”

Six months post-surgery, the cancer is still there but Michael’s incontinence is dramatically better. His rehabilitation enabled him to regain much energy and, together with 25kg weight loss, fitter than he has ever been in his adult life. He is delighted to be back at work helping others with their health issues.

“Since my cancer diagnosis, I have realised I do not want to waste any time. I do not have time to waste. I have become more focused on achieving the most I can in the time I have,” he said.

Michael hopes that by sharing his recent experience, others will feel empowered to seek help.

“The Continence Foundation of Australia is there to help. They give people, who don’t have the access to knowledge and resources like I do, the assistance they need to do something about their incontinence. I urge others to take that first step toward a better life.”

Diarrhoea has many possible causes including:

If you experience severe diarrhoea it is important to seek medical advice. For more information, call the National Continence Helpline 1800 33 00 66