Unseen symptoms of Parkinson's the most distressing 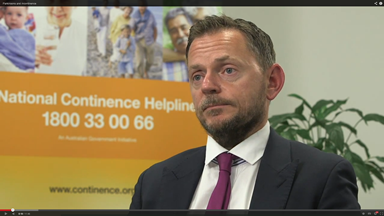 Continence management is one of the most confronting and difficult conditions For people living with Parkinson’s and their carers, according to Parkinson’s Victoria clinical nurse consultant and health team manager, Victor McConvey (pictured).

In fact, constipation, which is further exacerbated by the person’s reduced mobility, is one of the earliest and most persistent symptoms of Parkinson’s.

“Constipation is the most common difficulty experienced in Parkinson’s. Problems with constipation are a frequent subject for calls to the Parkinson’s Helpline, and the second-most common reason someone with Parkinson’s will present to a hospital emergency department,” Mr McConvey said.

Bladder and bowel function are both interrupted in Parkinson’s, but bladder difficulties are significantly exacerbated by constipation, he said.

“Bladder problems are very common in Parkinson’s, but often overlooked or considered to be a ‘normal’ part of ageing,” he said.

Parkinson’s affects the neural pathway between the bladder and the brain, which can cause the brain to tell the bladder it needs emptying with little warning (urgency), and often (frequency), he said.

Nocturia results from urgency combined with lowered blood pressure and a person’s reduced mobility, both of which are common in Parkinson’s, causing fluid retention that the body excretes as urine overnight.

Mr McConvey offered encouragement to people living with Parkinson’s and their carers.

“With good management these difficulties can be overcome, and the impact of the symptoms can be effectively reduced.”

There are a range of management strategies and treatments that can alleviate symptoms, and a 12-minute video about the management of bladder and bowel difficulties for people with Parkinson’s has been produced by Parkinson’s Australia and the Continence Foundation of Australia. View it at  http://youtu.be/ms-ZjJ0qFwI