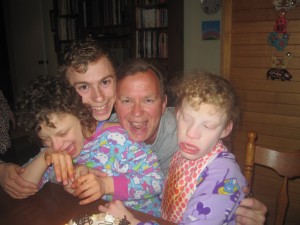 Thirteen-year-old twins Tegan and Glenys Saffigna can’t talk, dress themselves or eat most foods. But in the eyes of their proud father, Tony, they are no different from any other children – they love to be cuddled, play games and read to.

The girls were born 14 weeks premature, after an ultrasound diagnosed twin-to-twin syndrome, where blood passes from a single placenta disproportionately from one identical twin to the other. As a result, both were born with mental and physical disabilities. Tegan, who weighed just 601g at birth, suffered a brain injury in utero and is legally blind. Glenys had a cerebral bleed, lost a kidney and then both feet. Mobility, eating, communicating and continence are daily issues, and the girls will need full-time care for the rest of their lives.

'Tony ensures the girls have adequate continence aids, as well as managing medications, feeding, toileting, bathing, clothing, and managing all the general household tasks, such as cooking, cleaning and washing.'

Tony, of Mulgrave, Victoria, left his job in 2009 to care for his daughters and his wife Judith, who was battling ovarian cancer. Sadly, Judith died in August 2009, leaving Tony as the sole carer for Tegan and Glenys, and the couple’s 16-year son, Dylan.  Tony ensures the girls have adequate continence aids, as well as managing medications, feeding, toileting, bathing, clothing, and managing all the general household tasks, such as cooking, cleaning and washing. He also finds time to help out with general maintenance at the girls’ school.

“I’m not going to wave the white flag,” Tony said. “People say, ‘you do an amazing job’, but it’s just in me. It’s something I would never think about not doing, and if that means sacrificing my life to a degree, and I guess I have, then so be it.”

Tony paid tribute to his wife, who shouldered the responsibility of primary carer for many years before her death.

“Judith was a one-in-a-million,” he said. “She not only looked after the girls and Dylan, she was the president of this and the president of that, and volunteered to do all sorts of things and helped all sorts of people.” Before her death, Judith spoke of her hopes for Tegan and Glenys.  “She always said she wanted them to walk, talk and eat sandwiches,” Tony said. “And they both nearly do ... They are getting there and achieving milestones.”

“Their determination and willpower to achieve things amazes me every single day."

He said both girls could now walk, Glenys with the aid of prosthetic feet, and although neither could speak, they communicated through the gestures and sounds, and even the odd word.  “When Tegan first said dad, it was an unbelievable feeling,” Tony said. “And all the hugs and stuff, that’s pretty special.  “Their determination and willpower to achieve things amazes me every single day. We all do things every day that we take for granted, but for them to do the smallest things, it’s like having to climb Everest not once, but twice.”

Tony said his children were affected by the loss of their mother, particularly Dylan, who had a very close bond with his mum.  “He is very special. As much as you try to keep things normal and give him the same amount of time and support as you can, it is hard on him,” Tony said. “Dylan had a very special relationship with Judith, more so than the normal mother and son bond, so to lose his mother at 13 has been very hard.” And while Dylan helps around the house where he can, Tony said he was determined that his son should enjoy the same opportunities as other boys his age.

“He is not their carer. He is their brother and it’s his job to play with them, and he does a great job of doing that,” Tony said.

Queensland nurse Leonie Mulheran met the family on a flight six years ago and has maintained a long-distance friendship through phone calls and occasional visits.   “Tony is just amazing,” Leonie said. “I don’t know any other story that is quite as sad but at the same time, also quite as happy.”

For information, advice and resources on bladder and bowel health, phone the National Continence Helpline on 1800 33 00 66