Sophie* is a 32-year-old woman who has three children. During the birth of her first child, she had a difficult time, experiencing a long labour and having to push for over two hours. She was exhausted and eventually the obstetrician had to use forceps to help deliver the baby.

Her baby was big, weighing in at 4kg, but was otherwise healthy. After the birth Sophie* experienced some bowel accidents for about six weeks. She just couldn’t hold on for longer than a minute and the stool just came out. She was too embarrassed to mention this to anyone, so she just stayed close to home until she had opened her bowels for the day. 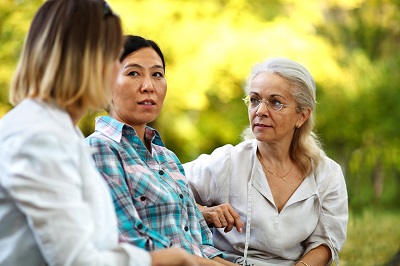 After the birth of her third child Sophie's* bowel accidents became more frequent and the bowel incontinence began to rule her life.

She was finding it difficult to get her older child to school in the morning and was suffering with increasing anxiety.

Sophie* declined invitations to take her younger children to the park as there were no toilets nearby. She was worried when invited out for a meal in case it triggered her bowel to work. Her husband knew that Sophie* was having some trouble, but she didn’t tell him the full extent of her problems.

Eventually Sophie* mentioned it to her GP, who sent her to a pelvic floor physiotherapist for some exercise training. This definitely helped her bladder leakage but did not help her bowel problem. The physiotherapist did openly chat with Sophie* about her bowel issues, and it was the first time she felt she had someone to talk to about this embarrassing problem.

What Sophie* found out was that this is unfortunately a common problem and may have happened because of the difficult delivery of her first child. The condition was called faecal incontinence and her needing to rush to the toilet to open her bowel was called urgency.

The physiotherapist gave Sophie* some ideas about establishing a regular bowel pattern, avoiding certain foods that may act as a laxative and discussed the importance of taking soluble fibre to help bulk up the stool. She also recommended Sophie* speak to her GP about seeing a colorectal doctor as there are a lot of treatments available for this type of bowel incontinence.

"She was too embarrassed to mention this to anyone, so she just stayed close to home until she had opened her bowels for the day."

Sophie* was very nervous about seeing the colorectal doctor as she didn’t really know how to tell them what was happening. However, during the consultation, the doctor was very kind and seemed to know exactly what she was experiencing. Sophie* was so overwhelmed with the relief that she would finally get help she couldn’t hold back her tears.

The bowel programme helped a little and it made Sophie* feel a lot better as she knew she wasn’t alone, and this was a common problem. She was still very embarrassed and didn’t tell her friends about what had been happening. She did tell her husband and her mother, and this allowed her to have a little more support at home.

After completing the bowel programme Sophie* went back to the colorectal doctor. Although things had improved, she was still having bowel accidents. The doctor suggested that she was a good candidate for a sacral neuromodulation. The doctor explained that this is like a small pacemaker that is implanted under the skin just above the buttock and it resets the nerves to the bowel and prevents the bowel from dumping the stool into the rectum. It restores the normal nerve function.

The sacral neuromodulation is done in two stages. The first is a test run to see if the treatment will work. This is a day procedure where a small wire is inserted t is worn on a belt for about two weeks. During this time Sophie* kept a bowel diary to see if it was helpful for her bowel control.

She was amazed at the difference. She was able to delay going to the toilet and had control of her bowel for the first time in years. It was life changing for her. When Sophie* went back to her colorectal doctor, she was very excited to report that it had worked so well.

Sophie* was booked in a few weeks later for a second day surgery procedure. This time it was to have the permanent sacral neuromodulator inserted just under her skin. This is all internal with no external wires, not that different from a heart pacemaker except it is implanted just above the bottom cheek.

Sophie* sees the nurse for programming her neuromodulator and a check-up once per year. The neuromodulator has a battery life of approximately seven years depending on what setting it is on. There are even rechargeable ones on the market now that will never need to be changed. The only limitation is that when she travels by aeroplane, she needs to say she has a pacemaker. She never tells the security  people why she has it as there is no need to and just goes through the side gate at screening. The model Sophie* has is also MRI safe in case she ever needs to have that type of scan.

Sophie* says it has changed her life and allows her to follow the active lifestyle that comes with having young children. She now has her confidence back and is always happy to discuss the procedure with other patients considering it.
Her advice is “at least have the test done to see if it will work as the potential benefit is amazing!"

Sacral neuromodulation only works for particular types of faecal incontinence and is not suitable for everyone. It is best to discuss this with your doctor to see if this may be a treatment option for you.