In March 2018, the Minister for Health announced that separate National Men’s and Women’s Health Strategies 2020-2030 were to be developed.

Both Strategies had the dual aims of independently building on recent improvements in men’s and women’s health and targeting emerging and persistent challenges. The Strategies will:

The priorities of each Strategy (see graphic) are remarkably similar, but the approaches and actions to be taken will be tailored to the particular needs of men and women separately. 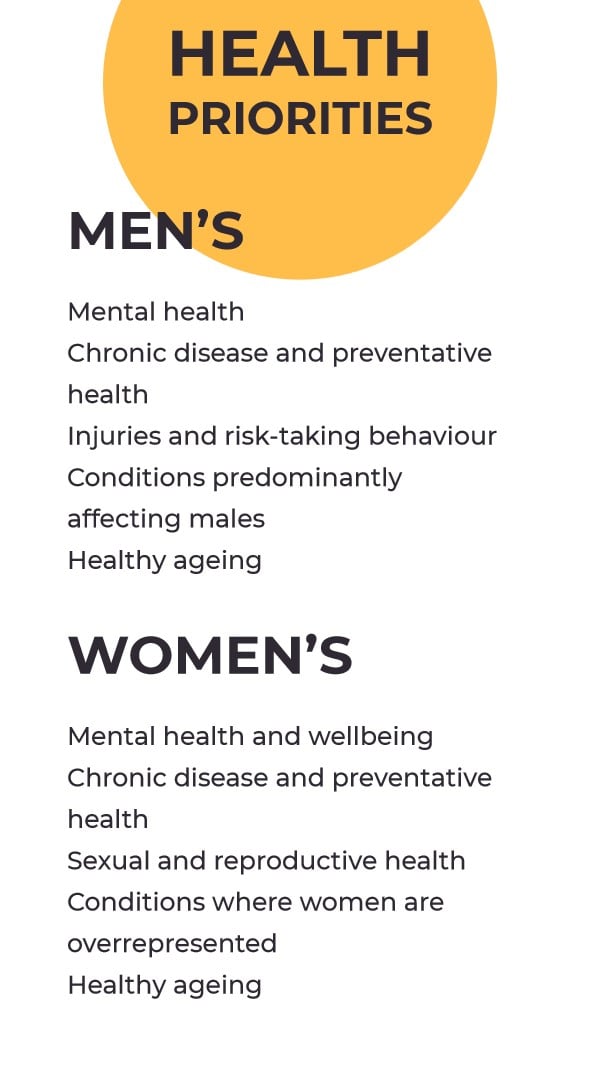 The Continence Foundation of Australia made two submissions to the Australian Government Department of Health in response to a call for submissions with a 3.5 week window.

The was no reference to incontinence in the Draft Men’s Health Strategy despite incontinence being identified as a key priority condition on the National Men’s Health Forum1 which preceded the drafting of the Strategy. The Foundation’s submission made those drafting the strategy aware that:

The Foundation asked that continence health be prioritised in the Men’s Health Strategy.

There was reference to the importance of the National Continence Program in the Draft Women’s Health Strategy which was pleasing, but it only appeared in the section on Health Ageing. The Foundation’s submission made those drafting the Strategy aware that:

The Foundation stressed that this Strategy is an important opportunity to get the health priorities, and mix of responses, right for Australian women and girls. Given that the impact of incontinence on their quality of life and physical and mental health is immense, it must be included in the Strategy.