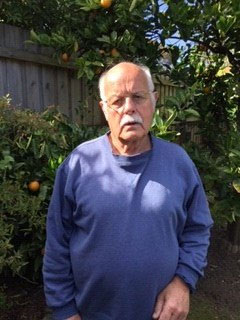 Prostate cancer is tough to handle at the best of times. Even more so during the “strange time” of a pandemic, as 71-year-old Brian Pegg found out.

Brian had been going to his urologist for years for regular check-ups. His doctor found that Brian had an enlarged (bigger) prostate and a small cancer in the prostate gland. He was told to keep coming for tests but not to worry. Things seemed  fine – the doctor even joked that he would “die of something else first.”

Then earlier this year, in April, hospital tests showed a second prostate cancer. The cancer was high-risk and Brian was called in for urgent surgery for the next week. This was during Victoria’s first wave of coronavirus (COVID-19).

Already surprised by the aggressive prostate cancer, he didn’t expect urinary incontinence to be a part of his life after the operation. “I can’t fault the nurse. She had a mask so was quite hard to understand. I was told more about pre-operation things. At the end, she said I might get a bit of leakage,” Brian said.

“Unfortunately, the leaking turned into a flood.”

Brian’s operation went well and was successful in removing the prostate cancer. He said his problems started when it came to take out his catheter (tube placed into the bladder that drains and takes out urine).

“The catheter came out very easily, but the moment it came out I started leaking. I was told it’s normal, and I said well, it’s not normal for me.”

This was Brian’s first time experiencing incontinence and it had a huge impact on his life. He was using overnight pads and leaking urine every day. He saw a pelvic floor physiotherapist who showed him daily pelvic floor exercises, but it was a steep learning curve.

“I spoke to lots of friends who had a length of time before they went in for surgery and had time to do the exercises.”

“I found out later that incontinence is quite common. I didn’t even know I had a pelvic floor. I didn’t know men did.”

Brian phoned the National Continence Helpline 1800 33 00 66 for more help. He couldn’t get out of bed in the morning without leaking and didn’t know what to do. He spoke with Steve, one of the Nurse Continence Specialists who works at the Helpline.

“He was the only person who actually took time and explained what incontinence is and how it happens. I think the personal touch helps. Booklets are okay to read, but if you actually speak to people it becomes more personal,” Brian said.

After his phone call with Steve, Brian noticed a difference within a couple of days. Following the advice meant he was able to stand up out of bed without leaking and had less leakage during the night.

“I’m looking forward to stopping leaking. That’s what I want to do so I can go back to being ‘normal’. Be able to go out and not leak and have to wear pads.”

“In a way it’s good that it’s happened now because we’re all locked down. I’m not going anywhere anyway. You get frustrated, you get annoyed but then you realise there’s light at the end of the tunnel.”

Now months on from his first phone call with the Helpline, Brian says his leakage is remarkably better. He no longer avoids exercise because of urinary leakage and enjoys walking two to three kilometres per day.

Read more about the prostate and the male pelvic floor.