This Women’s Health Week (WHW) the Continence Foundation of Australia has formed a community partnership with Jean Hailes and we are focussing on pelvic floor muscle health across a woman’s lifespan. This targets three important groups including teens and young women, pregnancy and post-partum and menopause and the years beyond.

It is a common human trait not to think too much about our health until we experience issues. Young women in their late teens to early twenties are usually not too concerned about their pelvic floor muscle health, often thinking that incontinence is an older woman’s issue and not something they need to be worried about. However, more than one in ten young women experience bladder leakage (incontinence). 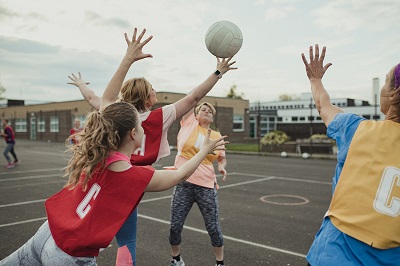 An Australian study, published in 2018, found that 30% of female netballers experience urinary incontinence while playing one of Australian women’s most popular team sports. Published by women’s health continence physiotherapist, Naomi Gill, the study found that one third of all netball players, and half of those who have had children, experience urine leakage during training or playing the game.

Ms Gill hopes the study will also encourage the exploration into appropriate rehabilitation for women returning to sport after having babies. “As a profession we need to be looking at what information and guidelines are available for how to safely return to sport after having babies to reduce the risk of prolapse and urinary incontinence, and generally how to properly rehabilitate your body after pregnancy,” she said. You can read more at one in three netballers are  incontinent.

The association between UI and high-impact physical activity is due to increased pressure on the bladder. The good news is that pelvic floor muscle training (PFM) is considered to be the first line of therapy among young female athletes.

It is known that UI in young people is both underdiagnosed and under-reported. Many young women may not address the problem or seek specialist help due to embarrassment and lack of knowledge. They may also reduce or withdraw from physical activity due to fear of developing pelvic floor issues.

Go Against the Flow (GATF) was started with one main goal – to let young women know about incontinence; that it does happen, but it doesn’t have to. The research and co-design strategy is all about education, awareness, support, and sisterhood ̶it’s about empowering young women to build a community where they can talk about ‘below the belt’ issues, starting with incontinence.

Like many women’s issues, there is something that can be done to treat incontinence and GATF is a website where young women can receive important information and support. The key message of GATF is that incontinence is both preventable and treatable and that it is not something a woman of any age should feel is a normal and irreparable part of her life.

GATF was created specifically for adolescent and young women as a primary prevention initiative with a long-term vision to curb the incidence of one in three women with incontinence and pelvic health issues later in life. For more information go to goagainsttheflow.org.au

The message is now loud and clear that women need to be thinking about the importance of their pelvic floor muscle health before they even conceive a baby! Evidence and the experience of healthcare professionals tells us that preparing the pelvic floor during pregnancy can reduce the likelihood of birth trauma injury and improve a woman’s post-natal recovery.

During pregnancy the body releases hormones that soften muscles, including the pelvic floor muscles. Along with the extra weight of a growing baby, this can weaken the pelvic floor and the organs it supports. Correctly doing pelvic floor exercises before, during and after pregnancy may help to reduce the chance of experiencing incontinence after birth.

Some women notice leakage (urine or stool) during pregnancy or after birth. It can take time for the pelvic floor and muscles to recover after birth, and every person is different.

Most women notice their bladder and bowel concerns improve in the first six months after birth, but others may experience ongoing symptoms and require professional care and support.

It is not uncommon following birth for women to experience a shift in the attention of healthcare professionals from them to the care and wellbeing of the baby.

Whilst this is a necessary focus, the care and wellbeing of the new mother in the immediate post-partum period is also vital, particularly if there has been significant birth trauma and/or injury. This requires informed and competent care, potential referral and a high level of support.

Otherwise, women may face embarrassment, stigma and shame, particularly if their injury is followed by either urinary or faecal incontinence.

It is vital for women to have access to a supportive group where they can talk to women who have similar experiences and share information and strategies. This can help women to better comprehend their experience and incorporate it into the story of their journey. Download Pelvic Floor  Health for Expectant and New Mums to learn more  about the pelvic floor muscles and bladder and bowel control health.

For more information on safely exercising to support the pelvic floor muscles during pregnancy and after childbirth go to pelvicfloorfirst.org.au

Much like we recommend preparing for pregnancy and childbirth, women also need to ideally consider their pelvic floor muscle health prior to menopause. Many women are ill-prepared for and poorly informed about the changes and symptoms they may experience during perimenopause and menopause. This can lead them to feel bewildered, scared, alone and ashamed.

Knowledge provides women with empowerment and often relief when they can attribute a cause to their symptoms, particularly loss of libido and greater susceptibility to urinary tract infections, which may often benefit from quite simple interventions.

The narrative around menopause is rarely positive, but this too is fortunately changing thanks to the information and communication boom that has seen the revolution of numerous podcasts tackling topics previously considered to be taboo, and the pioneering women and healthcare professionals who are making the changes that women want to see. Talking openly helps to reduce stigma and shame.

During the menopausal transition, the body produces less oestrogen which may contribute to changes in bladder and bowel health. The article menopause and incontinence explores the mechanisms which can lead to weaker pelvic floor muscles in more detail.