One day at a time: Sarah’s story of spinal cord injury

Sarah Wise’s time living abroad in London was cut short after a serious fall in October 2019. Over a year on, she reflects on what she’s learned and what she wants the world to know about spinal cord injury.

Sarah Wise often finds herself explaining the most traumatic day of her life to people she has just met. Complete strangers will come up to her to ask about her walking stick and her reasons for using it. But 26-year-old Sarah is patient and kind-hearted – even when people might not deserve it. “I know people are just curious, but they don’t understand the weight of their question,” she says. “In those little moments I’m just trying to educate people, one person at a time, using my story to raise awareness about spinal cord injury.”

Sarah’s accident happened in October 2019, when she fell off a friend’s shoulders at the back of a concert. Paralysed from the neck down, Sarah was rushed into hospital. She knew she couldn’t move or feel her body but wasn’t sure what the injury would mean.

“I just kept asking every single nurse and doctor who leant over my bed, ‘will I walk again, will I walk again?’,” Sarah says. “Their faces were… I don’t know how to describe it. The look of despair when you don’t want to tell someone bad news. And they would say ‘I don’t know if you’ll walk again’, and so I didn’t really get any answers. They didn’t give me much hope.”

Sarah was told she had a C3 incomplete spinal cord injury, meaning the spinal cord was damaged but had a chance for some movement and sensation. Her injury resulted in quadriplegia (paralysis of arms, legs and torso). She also had trouble speaking (vocal cord palsy) after surgery and would have to spend more than three months in hospital.

LEARNING TO WALK IN HOSPITAL

“On day 12, I moved my right toe for the first time. That was like the best moment in my life,” Sarah says. From there, she set an “ambitious” goal to be able to walk by her birthday – three months away. Her background as a cheerleader and elite gymnast meant she was used to pushing her physical limits. In hospital, she swapped training with coaches to training with surgeons and physiotherapists, impressing them with her quick progress.

Like an early Christmas present, just two months later in December, she took her first wobbly steps without help. By March she no longer relied on her wheelchair.

At first look, people see Sarah’s ability to walk as a complete recovery. She was flooded with comments and messages after sharing a video on social media, with people saying they were so proud to see a total recovery. This is one of the myths Sarah wants to challenge. “Mobility isn’t the only issue people with spinal cord injury experience, but it’s the only thing onlookers see.”

"The reality is it's not possible to have a 100 per cent recovery." 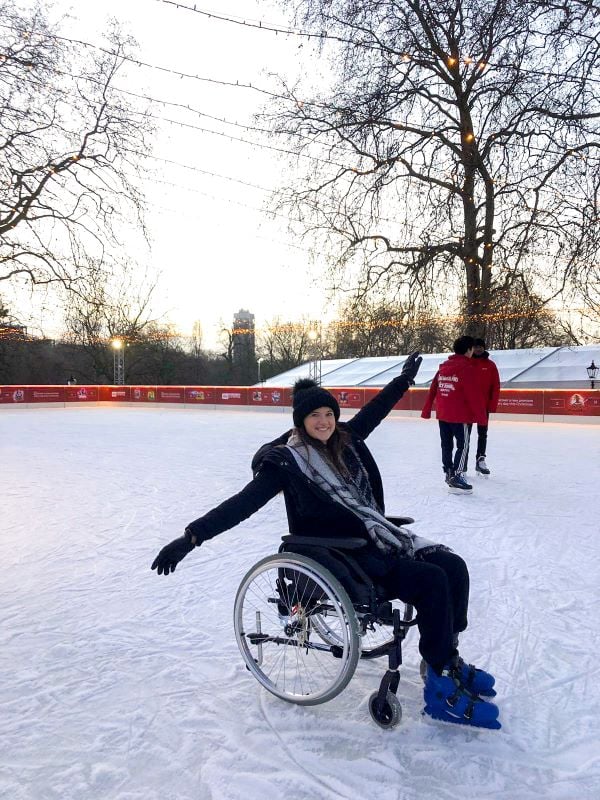 For Sarah, heading towards independence in her bladder and bowel routine meant a lot. Second to moving her big toe, an unexpected moment stood out. “The second proudest moment was doing a wee by myself. That was something I was pretty scared of after depending on an indwelling catheter for seven weeks,” she says.

Finding a new continence routine was filled with emotion and took some time to get used to. Her first time having a bowel accident was on her first day in rehabilitation hospital, and she remembers it as a “horrifying” experience.

“I was crying and in total shock. I thought I was an independent 24-year-old, so it was very confronting.”

“… Then you learn it’s not anything to worry about, it’s part of the process of learning to manage your bowel. You just clean up, change clothes and say, ‘things are a bit messy right now but it’ll work out’.”

Sarah has a light-hearted approach to these important topics, and most of all, wants to encourage other people to feel comfortable talking about them. “I believe being open about your situation will encourage others to share their stories, and in the end will reduce the awkwardness and taboo around bowel and bladder health.

Everyone needs to go, some people just do it a bit differently!”

Issues with bladder and bowel function are very common in people with spinal cord injury (SCI).

There are many options to manage continence care after spinal cord injury. These can include the use of catheters to drain the bladder, pads and products, abdominal massage, medication and help from a carer. An individual assessment is very important.

Research shows that continence problems affect quality of life and are reported as one of the most difficult symptoms after spinal cord injury. One USA study of women with SCI found bladder and bowel health was a “major source of stress and frustration in their daily lives."

Although awareness is growing, sometimes the public can forget there are many kinds of disability and not all are visible. Sarah says she struggles with this as a young quadriplegic person with the ability to walk. When she was using a wheelchair, then walking aids, her experience fit people’s expectations of what a disability is or looks like. 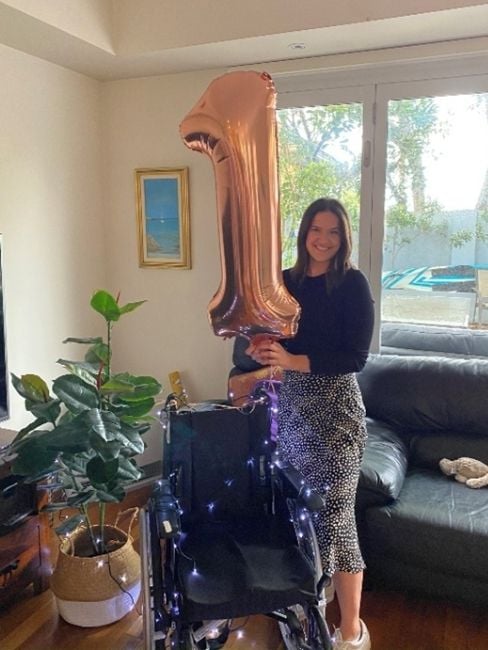 “I can walk without aids at the moment, but sometimes I do use a stick. So it is that strange grey area between ability and disability. I get fatigued very quickly and have hand dysfunction which impacts on simple tasks like washing the dishes,” she says.

“Recently, I was almost not allowed into a pub and questioned about my stick and medical information. The public make assumptions about me as a young person needing a chair to sit down or use disabled toilets. People are quick to judge, but no one knows anyone’s story.”

She looks at facilities and places in a different way now, interested in how changes in design can make a difference to people with disability.

“This year, my main focus is my therapy, to try reach my maximum recovery – whatever that is. I really want to learn to run this year,” Sarah says.

As a social butterfly, she’s enjoying being back with family and friends in Sydney and exploring her creative hobbies. “With everything going on it’s just hard to plan the future. I would like to go back to London and live an independent life. I haven’t finished that chapter of my life. I’m taking one day at a time and just focusing on my little improvements every day.”