Netballers: switching on the pelvic floor 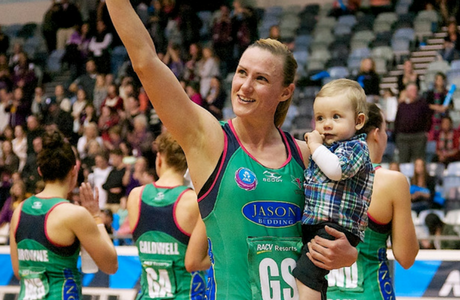 Elite netballer, Sharelle McMahon remembers the day well. She was at a training session with the ANZ Championship team, the Melbourne Vixens when a physiotherapist used an external ultrasound to track how well the players were switching on their pelvic floor.

“Only one of us in that group was actually activating our pelvic floor correctly, and that one wasn’t me,” said Sharelle.

“The team’s physio was quite shocked. When we went through our training we were frequently asked to engage our core and our pelvic floor - that was part of the training program. So while that was a focus, we weren’t actually doing it very well.”

The exercise was done about 10 years ago, and prompted Sharelle and her teammates to take action.

She said the issues surrounding a weak pelvic floor do not necessarily start after having a child. The ultrasound exercise was used on her team about four years before she had her first child.

Sharelle was referred to another physiotherapist, a pelvic floor specialist, who did an internal ultrasound to further identify how she was switching on her pelvic floor, and help her correctly engage the muscles.

Sharelle has participated in the pinnacle of the game, representing Australia in the Commonwealth Games between 1998 and 2010, winning gold in 1998 and 2002, and silver in 2006 and 2010. She played 118 games for Australia, won two World Championships, and was the Australian flag bearer for the opening ceremony of the 2010 Commonwealth Games in Delhi. In 2016, she was inducted into the Australian Sport Hall of Fame. She currently works as a specialist coach for the Melbourne Vixens and commentates on the sport for Channel 9.

Elite athletes such as netballers, basketballers, gymnasts, trampolinists, tennis players and runners are at increased risk of developing pelvic floor problems. This is because of the constant and excessive downward pressure that these sports place on their pelvic floor.

Sharelle believes the prevalence of continence-issues for netballers is likely due to the sport’s high impact activity involving jumping and running.

“And the people playing are mostly female, so rather than it being an issue necessarily specific to netball, it’s likely something happening more broadly and it just happens to be that netball by its nature is one of those activities that has those high impact movements and a high number of female players,” she said.

Sharelle returned to elite level netball about three months after she had her first child, Xavier.

“So I went back into high level training pretty quickly,” she said.

“Particularly with training, I had some pain associated with my pelvic floor which presented as pelvic pain and back pain. So in that year after having Xavier, I had a lot of treatment to help relieve the symptoms but also to work on strengthening my pelvic floor in particular. I was wearing a pelvic band to give myself a bit more stability as well.”

“You can see it on the screen and get a sense of that’s the feeling when you’re switching it on properly,” she said.

Sharelle said she thought it was sad that research showed many affected by continence-related issues just resort to wearing pads or stop playing netball altogether.

“For me personally, going to see someone to help in that space was incredibly beneficial. You don’t have to live with the symptoms of a weak pelvic floor. There are people who can really assist in that space,” she said.

“It’s something that a lot of people are dealing with and just dealing with the symptoms is not the answer - it can lead to some much worse issues down the track. Addressing the cause can really help.”

She advises anyone going through any continence-related issues, or any issues related to pelvic or back pain to begin with seeing a physiotherapist.

“Get advice to ensure you’re switching on the pelvic floor muscles correctly,” she said.