After experiencing a traumatic childbirth injury and pelvic organ prolapse, Stephanie Thompson’s direction in life was changed. Now a published author, advocate, mum of two and founder of the Bravemumma community, Stephanie is on a mission to continue opening the conversation about pelvic health and childbirth.

“For a long time, I suffered in silence,” Stephanie Thompson says. While she now speaks openly and frankly about her experience, it was quite a journey to get here.

In 2015, she gave birth to Elsie, her first child, at her local hospital in the Illawarra region of New South Wales. “It was quite a traumatic experience and left me with some physical injuries, as well as mental and emotional, but predominately physical injuries to my pelvic floor.”

A couple of weeks after giving birth to her daughter, Stephanie was in the shower and started panicking. She noticed something “hanging out” of her vaginal opening and the haze of new-parent sleep deprivation had her jumping to conclusions.

“At first, when I had no idea, it looked like a baby’s head,” Stephanie says.

After being initially told it was ‘normal’, Stephanie kept searching for answers, knowing that nothing about what she was experiencing felt normal.

At her six-week postnatal check, it was suggested that she may have a prolapse. “I was like ‘a pro, what? What is that?’ I remember thinking, ‘Wow, I’ve read so many pregnancy books, we went to all the birthing classes… and not once was the word prolapse ever mentioned.’

“We felt a bit blindsided and I actually felt quite silly. So, I said nothing. I kept it very private with my husband and our physio and then carried on like it was normal to the outside world.”

While this was all extremely tough, Stephanie had another setback to face. She had already unsuccessfully tried multiple pessaries (a plastic or rubber device measured and placed into the vagina to provide inside support for the pelvic organs) in physiotherapy. After the birth of her second child, she wanted to revisit surgery options. She was then told that in her case, the chance of the prolapse recurring again after surgery was extremely high (90 per cent within two years).

Looking for a temporary distraction while scrolling on her phone, it was entrepreneur and author Andrew Griffiths’ posts about his writing workshop in Bali that gave her an idea. Stephanie knew Andrew from her previous small business and ended up sending him a message.

“He said come to Bali, write your books for once. I had been talking about writing a book for years but didn’t know what to write about,” Stephanie says. “In my mind, I just wanted to vent and write everything that had happened to us. Put it in a diary and put it away.”

Her husband Tom encouraged her to pursue this seriously and she was writing at the retreat the very next week. Not wanting to stop writing, in fact. “I spent one whole night just crying the whole time as I was typing. For me, it was very cathartic. Chapter one was written in Bali in a week.”

Stephanie describes writing about her experience as the best thing she’s ever done. “Once those words were out on paper, I could then tell anybody… initially, it was really hard to talk to anybody.”

“It also helped me go get professional counselling help. I didn’t realise I was carrying a bucketload of grief until I wrote this book. Being able to talk about that with people now, I can talk about it with anybody, my friends, my family.”

While writing the book, Stephanie started the Bravemumma online community with a Facebook group to support other women with similar experiences of prolapse and pelvic health issues.

She started sharing her ‘workarounds’ like robot vacuums, steam mops and slow cookers – things that made living with prolapse a little easier. “I just started sharing some of the tips that I was using. Like we have a robot vacuum because any kind of downward pressure using a vacuum, it makes my prolapse more symptomatic,” Stephanie says.

Mornings are her best time, where she has about one or two hours of pain-free and upright time, with the prolapse symptoms flaring up as the day goes on and forcing her to stop movement.

Sharing these experiences was what motivated Stephanie to keep writing and make sure her book was published.

“I am an incessant thinker; my mind never switches off. Being able to channel that into things that help others is my jam, that’s what makes me feel good.”

While she describes herself as a ‘type A personality’, others in her life see her as hard-working and a go-getter. At 32, she was one of the youngest primary school principals in Sydney at the time. She started her own small tea business and competed in triathlons. 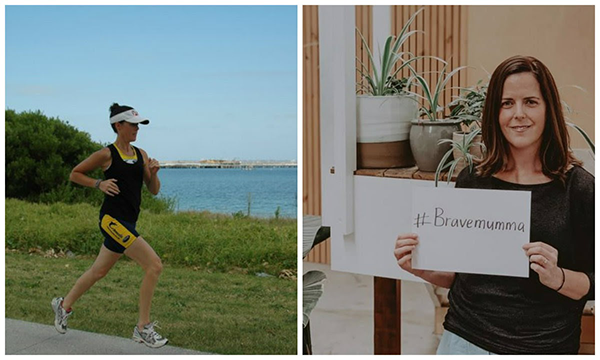 “When you look at me now there is nothing wrong. It’s invisible disability and I call it a disability because it’s disabled me from doing my job. It disables me from being the wife I want to be with my husband. It keeps me from having my own tea business. It disables me from being the mum I want to be, the triathlete, from everything I’ve worked so hard for.”

While her condition is a hidden one, Stephanie is desperate to open up the conversation about it. Her frustration lies with the way topics like prolapse and faecal incontinence are considered ‘taboo’.

“Incontinence and prolapse, no one talks about it.”

“I’ve pooed myself and didn’t even know it. With faecal and urinary incontinence, there’s so many different types. It’s not just about jumping on a trampoline and going ‘ooh, I’ve got a little drop of wee’… No one talks about the extremities of that because we don’t want to scare women.”

With her book, website, online community and upcoming podcast, Stephanie Thompson is making sure that people around the world feel confident in bringing up stigmatised topics, like prolapse and incontinence.

“I’m hoping that women carry the conversation on the topics that we talk about within their trusted circles.”

Find Stephanie Thompson and details of her book, podcast and social media online at www.bravemumma.com