A former elite athlete and corporate lawyer, Kimberley Smith was used to functioning at her peak. Like so many women, she was understandably shocked by the impact childbirth had on her body and so began her journey to return to exercise in a safe and positive way.

Kimberley was an elite athlete from the age of 18, attending the Australian Institute of Sport in Canberra straight out of high school. She played netball at the elite level for over 10 years, representing the NSW Swifts and was a member of the Australia Diamonds Squad. She says “at times I had leaking of urine at the end of a very hard training session, but I didn’t think much of it at the time. I just thought it was a sign my body had worked hard.” It was also a topic that none of the athletes discussed. Given the statistics on incontinence amongst female athletes, Kimberley says it is likely that at least two to three members of her team also experienced it, but no one talked about it.

“In the sporting world we received so much information on nutrition, exercise and training, but the pelvic floor was never mentioned. I would love to see that change,” she says. 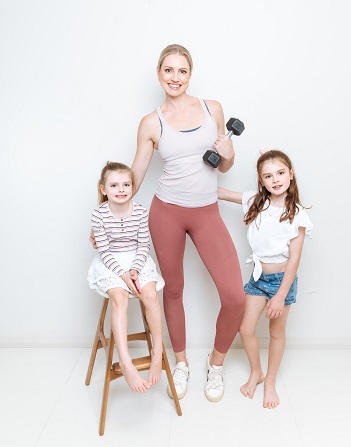 Heavily pregnant with her first child in 2012, Kimberley said she was in the middle of a shopping centre when she sneezed and completely lost control of her bladder. “I was so embarrassed,” she says, “but I still didn’t think too much about it or see it as a red flag.” Following a long labour and giving birth to a large baby, Kimberley knew something was wrong. She had a grade two cystocele prolapse and went back to the hospital to seek advice and support one week after giving birth. When told that her pelvic floor looked normal, she sought another opinion. Kimberley was fortunate to then meet Titled Women’s Health Physiotherapist, Lyz Evans, who supported her recovery with pelvic floor muscle retraining and exercise.

Kimberley’s post-natal goal was to get back into the high level of exercise that had always been a huge part of her life, and she wasn’t going to let incontinence get in the way. It wasn’t until after the birth of her second baby that what she had previously experienced as stress incontinence became urge incontinence as well, and the incontinence overtook the prolapse as an ongoing health issue.

With a third baby and the impact of each pregnancy on her pelvic floor, Kimberley says her incontinence slowly increased in frequency over time to the point where it was affecting her quality of life almost every day. “I couldn’t predict when it would happen,” she says. “I could do a big training session and have no leakage at all, then wet myself when I just went to put my shoes on. It was random, so frustrating, and obviously the reasons behind it were complex.”

Kimberley’s journey has been a long and challenging one in which she has modified her lifestyle substantially and accepted that she can no longer do all the high intensity exercise she was able to do before. Her body had changed, and her pelvic floor had dictated that she needed to adjust accordingly.

“Women need information early and they need so much more,” she says. “A woman needs to know about the reality of childbirth and what can happen. Then she needs to be prepared with proactive strategies to assist with labour, birth, and post- partum. Giving birth is one of the most incredible things our body can do, but the impact and repercussions are just not talked about enough.”

Kimberley’s passion is to see quality exercise and health education readily accessible and affordable for all women. She would also like to see more nuanced conversations about living with and managing incontinence long term.

“One of the things that bothers me is that we laugh and joke about Mums wetting themselves when they jump on the trampoline, but I think this sends out the message that incontinence is normal,” says Kimberley. “The message that incontinence is common, but not normal is a step in the right direction, but it fails to share that there is so much that can be done to help reduce or manage incontinence. Anyone who experiences incontinence should see it as a warning sign and a red flag telling you to get onto this and do something about it floor, while others will experience incontinence because of an overactive bladder.

Without proper guidance and education, you might never fully understand the root cause of your leaking. A Pelvic Health Physiotherapist or Nurse Continence Specialist can provide this guidance and support.

“In the sporting world we received so much information on nutrition, exercise and training, but the pelvic floor was never mentioned. I would love to see that change.”

Kimberley’s passion led to the launch of the Empowered Motherhood Program with co-founder and physiotherapist Lyz Evans. This is a complete online program for every stage of the pregnancy and postnatal journey, with physio-led exercise and education, including a specialised prolapse program for women with prolapse or weak pelvic floors. For more information go to empoweredmother.com.au.

WHAT IS A GRADE TWO CYSTOCELE?

A cystocele is a prolapsed or fallen bladder, which can occur after a vaginal birth when the ligaments that support a woman’s bladder and vagina become stretched or weakened, resulting in the bladder sagging into the vagina. There are three grades of cystocele which include:

The bladder before and after prolapse 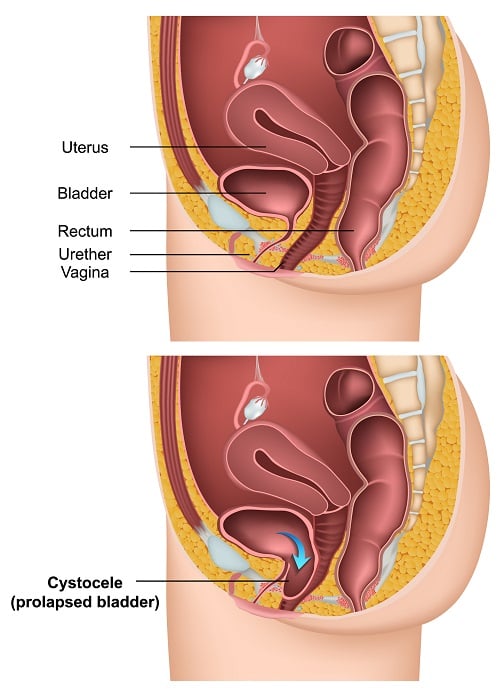