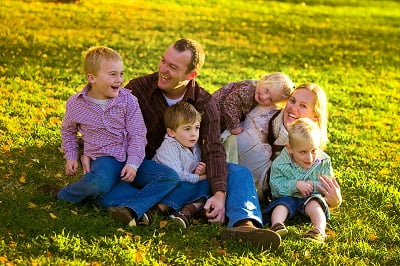 Joe Roberts was born 10 years ago with profound disabilities as the result of a mild virus his mother, Jodie, contracted while pregnant. Her remarkable strength and leadership since his birth have earned her the 2015 Continence Foundation’s Carer of the Year award.

Jodie Roberts’ second pregnancy 10 years ago was nothing out of the ordinary. Looking back on it, however, she does recall being particularly run down and tired at one point. But that was no big deal; she had a toddler to chase after and life was busy.

And then Joe was born at the Bowral hospital. A beautiful blond, blue-eyed boy. Jodie and her husband, Scott, barely had a moment to take in the wonder of it all when “all hell broke loose”.

He wasn’t breathing well and his tiny body, which was covered in a rash, was immediately intubated. His sight and hearing appeared to be affected, and his condition deteriorated so quickly, he was flown to the Sydney Children’s Hospital ICU after just two days.

After another agonising three days and a battery of tests, Joe was diagnosed with congenital cytomegalovirus, or CMV, a virus which, when transmitted from infected mother to foetus, can cause disabilities.

When contracted during childhood the CMV virus is relatively innocuous, but if contracted while pregnant, as Jodie did, is the most common non-genetic cause of genetic disabilities. CMV affects one in 150 babies born in Australia each year, and while most babies have no symptoms, one quarter will develop disabilities, some of them profound, like Joe’s.

On day 10, Joe had a central line inserted and for the next three months, was infused with a highly toxic drug, ganciclovir, which would help slow down his deterioration. Jodie recalls sitting with Scott in ICU one day as they gazed into Joe’s crib, when Scott said: “If he can see us and hear us, and if he knows we’re his parents, then nothing else matters.”

That pretty much sums up the attitude the couple has adopted all of Joe’s life. He has been nurtured, loved, protected and championed ever since.

Joe came home to Cootamundra after three months, and so started a round of appointments with a host of clinicians punctuated by six-weekly trips for surgeries to the Sydney Children’s Hospital, five hours away. Jodie also tapped into all the services available in her area.

From infancy Joe screamed a lot, often in physical pain as the result of his spasticity, which still requires hours of physical therapy each week. The damage to his organs affects many parts of his body; he has scarring of the brain tissue that affects the transmission of signals, cerebral palsy, global developmental delay, visual and hearing loss, no speech or language, and is completely incontinent. Confined to a wheelchair with limited mobility, Joe is often constipated, and sleeps poorly, most nights involving him waking in pain, cramping, or just crying in frustration.

In the midst of all this, Jodie had two more children; at one point she had four children aged four and under. As well as older brother Matthew, Joe has a younger brother, Oscar, and sister, Sophie.

Jodie and Scott have been ever-mindful of the influence Joe has on the lives of their other children, and have always worked hard to make it a positive one. While Joe can’t walk, he loves to swim, so family holidays have always been at the beach, where Joe is at his happiest and his body at its most relaxed. He has an infectious laugh and is obviously much loved and treasured by his family.

Jodie believes that as a family they have acquired more empathy, awareness and understanding of difference, and are less judgemental of others. She sees this in her children, who pay no attention to other children’s differences, only noticing their commonalities.

But Jodie does admit to downsides. She has often been stretched to her limits, and says there have been times when her other children have missed out on her because of Joe. She describes particularly exhausting periods when she says she felt “lost in a maze”, and “not in this world”, even admitting, with some regret, that she can barely remember her third child, Oscar, as a toddler.

Now that Joe is at school, something he loves, Jodie has more time, which she spends organising his many appointments, attending NDIS information sessions, trialling equipment or applying for funding. She also goes into school regularly to help out with Joe’s therapy sessions.

Caring for Joe has been an intensely focussed, exhausting balancing act. However, Jodie and Scott have been a solid team throughout; they focus on what Joe can do instead of what he can’t, they don’t sweat the small stuff and have overhauled their values and priorities. She refers to Scott and the children as “Team Roberts”.

Jodie admits to periods when she has run herself dry, when she risks “going under”. The couple see the repercussions for the family if they don’t look after themselves, and make the time to “fill up their own bucket”. For Scott it’s playing cricket. For Jodie it’s time with girlfriends and helping others in positions similar to hers.

Jodie and Scott are also acutely aware that most marriages of parents of severely disabled children fail, so every Thursday Jodie and Scott have a “date night”, which might be as simple as going for a walk, while a carer looks after their children.

In Jodie’s estimation, Scott is the “best man in the world”, and she worries about women in similar positions who don’t have supportive husbands like Scott.

Caring for Joe also requires ongoing expense, whether for the dozens of continence products he goes through each week, his regular therapy sessions, equipment or major modifications to the house or car.

To help Jodie and Scott meet some of the funds needed to modify the family car, the local community took part in a charity cricket match in Bowral and a ladies dinner in Cootamundra, with donations made through the Cootamundra Lions Club.

Forever championing their son, the couple are strong advocates for community awareness-raising of congenital CMV, a condition more prevalent than Down’s syndrome and foetal alcohol syndrome.

Jodie became a member of Carers NSW, but it wasn’t long before the organisation recognised her abilities and asked her to become a NSW Carer representative. She is now the Cootamundra Carers’ group facilitator, supporting carers in her community through monthly social activities by providing informal counselling and promoting their activities through social media and other networks.

Jodie said she was delighted to be awarded the Continence Foundation’s Carer of the Year, accepting the accolade on behalf of Team Roberts. But she hopes the award will do more than just recognise her for her role as Joe’s carer. She hopes the award will create a greater understanding and awareness of the enormous strains and challenges carers like her experience every day.

As Jodie says, carers will always put themselves last, will be inevitably financially worse off, will put their careers aside, and will have precious little social life, if any.

But, as the Roberts’ story shows, despite the sacrifices and challenges, Joe has brought immeasurable riches to their lives.

You can view a short video of Joe's life here.