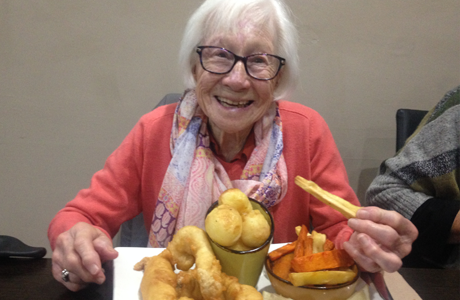 A colostomy at the age of 21 was not the end of the world but the beginning of a new one. Now at 95 years of age, Jean Croxton shares some of her inspirational wisdom with granddaughter Kellie Matalone

When my grandmother Jean Croxton was 12 years old, a horrific accident left her with third degree burns. Her love of dancing became a thing of the past as she fought for survival.

She’d learnt her trade as a seamstress and during World War II worked for the Red Cross, helping the returned soldiers.

In late 1942, she noticed the symptoms that would change her life. The diagnosis was cancer of the bowel. The following year, she had a colostomy with little hope of survival because she was only the second young person to have this procedure in Adelaide. The first had not lived.

Jean did survive and after three months in hospital was discharged with some cotton wool and an eight-by-four-inch piece of plastic to cover her stoma. At that time, stoma bags hadn’t even been introduced to Adelaide. Jean also had the help of a district nurse, but still was not given any hope of survival past the next eighteen months.

At 21 years of age, Jean would be the first to admit that she thought her life was over. “Who would ever want me again? Who could love me as I was? Would I smell? Maybe it would have been better if I hadn’t survived?” Jean recalls.

She didn’t have long to feel sorry for herself. Jean could not believe it when a friend of her brother took an interest in her. Ron was kind and caring and did not care about her tummy or the fact that she may not have a long life to live.

Soon after, Jean’s only sister passed away during childbirth. Jean and Ron reared the baby girl, Frances, as their own.

Jean had learnt to irrigate her colostomy with a piece of tube and an enamel deuce can. These pieces of equipment she used three times a week for the next seventy plus years. For her, they’ve been her saviour, along with her diligence, belief and perseverance.

From 1943 until 1971, Jean had never used a stoma bag. When she was finally introduced to one, she enjoyed the freedom they provided so she could travel. These travels have included the Great Wall of China, Europe, America, all over Australia and she has “walked the path of Jesus”.

One of Jean’s exploits included catching the ‘Red Eye’ flight from Adelaide to Melbourne, train to Bendigo, visiting the Grace Kelly exhibit, and then returning by train and plane to Adelaide all in one day. At the time, she was 92 years of age.

In her daily life, she rarely uses stoma bags preferring to do as she’s always done, irrigate. The bags, however, do give her added confidence when she is travelling.

So how has she done it? Hygiene, healthy diet, exercise and, setting small goals. Plus a very positive attitude. Jean said that hygiene is the most important thing to be aware of. This helps to eliminate infection.

She has learnt by trial and error what foods are best for her and when she should eat them. She chose not to eat meat after a blockage caused a hospitalisation. She does make a broth from fresh meat to get the goodness from it. Chicken and fish also feature on her diet as well as fresh vegetables. No greasy take away. Plenty of fresh fruit in season, or stewed fruit and fruit drinks. Before any food in the morning, she likes to drink a warm glass of water to start the digestive process. She also drinks plenty of water throughout her day. She doesn’t drink alcohol or soft drink (“too much gas”) and has never smoked.

“Always remember, what you put into your mouth has to come out,” said Jean.

Exercise has always been a big part of her life. Jean still walks up and down the stairs at her granddaughter’s home daily and does strength exercises. For many years, she was a fitness instructor at the War Widow’s Guild. That community service earned her a spot on the 2000 Sydney Olympic torch relay, handing the torch over to the former Australian wicket keeper, Rodney Marsh.

“During the past 73 years I’ve definitely had my ups and downs; I used to worry so much about how much time I had left because I had so much to look forward to. I began to plan my years by what I wanted to achieve. I loved my family, my job. When I retired, I gave my time to the Colostomy Club helping others in the same boat as me.“

“In the early years I was able to go to work. I looked after both my mother and the baby daughter I was given. I met a wonderful supportive man who knew I’d had a colostomy and we were married. The doctors always said that my life could be cut short at any time, but I never let that stand in the way of my living and loving life to the fullest.”