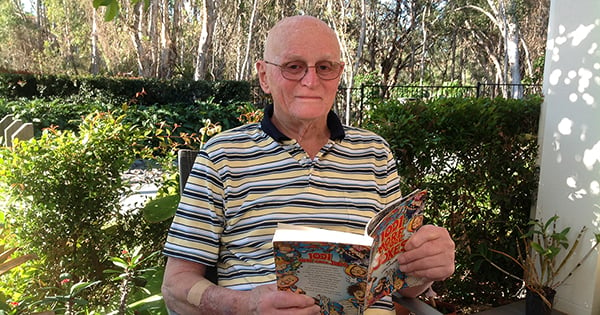 Imagine spending the last 20 years waking up five to seven times a night to go to the bathroom - the hours of sleep disturbance certainly add up. In fact, David Vine’s sleep loss worked out to be equivalent to two years of his life.

David was in his 50s when he started to wake up multiple times during the night, needing to pass urine. This need is often diagnosed as nocturia and is increasingly more common as people age.

For David, it wasn’t as simple as ‘getting up and going’.

“I’d lie there awake for around half an hour and try to fall back asleep to avoid going to the bathroom. It didn’t work. It’s hard when you’ve got a full bladder, so I was losing a lot of sleep through the night,” David said.

He was simply putting up with the disturbed nights after seeing a doctor to check there wasn’t something more sinister at play.

“I had it checked out by the doctors to make sure there wasn’t a bladder infection, and that turned up clear,” David said.

By chance, a local Neighbourhood Watch Group held a seminar with a speaker from the Continence Foundation of Australia.

David was listening to the presentation on bowel incontinence and it got him thinking about his own struggles with bathroom business.

A call to the National Continence Helpline and one nocturia booklet later, he thought he’d try a few lifestyle adjustments to find some relief in his symptoms.

One adjustment seemed particularly pleasant - lying down with his feet up for a few hours in the afternoon. It was non-invasive and as a bonus, gave him a chance to read about mental health and religion, as well as his favourite joke and riddle books.

The Helpline had coached him on the correct position: making sure he was lying flat with legs above heart level and resting for at least an hour, preferably more.

And what a difference it made! These days, David’s night-time bathroom visits have drastically reduced and at most, he gets up twice a night - or even not at all.

The reduction in nocturia symptoms had remarkable impacts on other areas of his life and health.

“I’m actually drinking more water, now that I know it’s not going to affect my sleeping.”

He introduced healthy bladder habits, like steering clear of coffee in the afternoon and doing pelvic floor muscle exercises – though he’s still working on being as “regular as I should be” with the exercises.

David is now an advocate and spreads the word about continence awareness within his retirement village in Durack, Queensland.

“I realised that where I live there’s around 700 people and a lot of them are aged. One would expect a few hundred of them to have some degree of anxiety and problems with urine. So, I tell them about it. But my wife doesn’t like me talking about it – says it’s embarrassing.

“Some of them looked at me and said, ‘rubbish’. Others tried it and said: ‘Hey beauty, I only get up once a night now.’ The people I’ve spoken to about continence, they’ve all said thank you.”

Nocturia symptoms (getting up from sleep to use the toilet more than twice) can have different causes for different people and it is important to find your cause. Make sure to seek a diagnosis and advice from a health professional for your specific situation.

What does lying down have to do with nocturia?
Nocturia symptoms can occur when changing position from being upright to lying flat for the main sleep period (which occurs at night for most people). This change in position signals that your body is at rest and after a while, your kidneys will function more productively. Their function includes filtering the body’s blood and producing urine, which may give someone the urge to wake up to go to the bathroom.

If someone starts this process earlier and lies down in the correct position during the day, the excess fluid that may be in someone’s legs has the chance to drain away and flow through the kidneys. Therefore, urine is made earlier in the day or the evening, rather than at night.

This story was first published in Bridge Magazine. Subscribe to Bridge online.