Exercise stops men getting up at night - study suggests 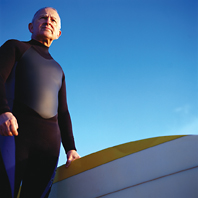 Just one hour of physical activity per week can significantly reduce the likelihood of nocturia in men, according to a recent Loyola University study.

The findings of a recent Loyola University study that looked at men’s  level of physical activity and compared it with the prevalence of nocturia (getting up to go to the toilet more than two times per night) suggests that men who are physically active are less likely to be affected by nocturia.

The study looked at data from 28,404 men aged between 55 and 74 who had symptoms of enlarged prostate (also known as benign prostate hyperplasia, or BPH), of which nocturia is a common and bothersome one.

Nocturia can result from BPH, when the enlarged prostate squeezes the urethra (the tube that runs through it and empties the bladder), causing difficulties with bladder-emptying.

BPH is benign and the most common prostate disease, often starting around the age of 40 and affecting most men eventually. The prevalence of nocturia  also increases with age, and is estimated to occur in more than half of men aged between 70 and 79.

The study was published in Medicine & Science in Sports & Exercise.