Of all the changes a woman can face after giving birth, for Elicia O’Reilly, unexpected incontinence was the worst. After giving birth to a large overdue baby, Elicia was shocked when this happened to her and although a midwife explained that immediate post-partum incontinence was common after vaginal birth, it was something Elicia felt completely unprepared for. 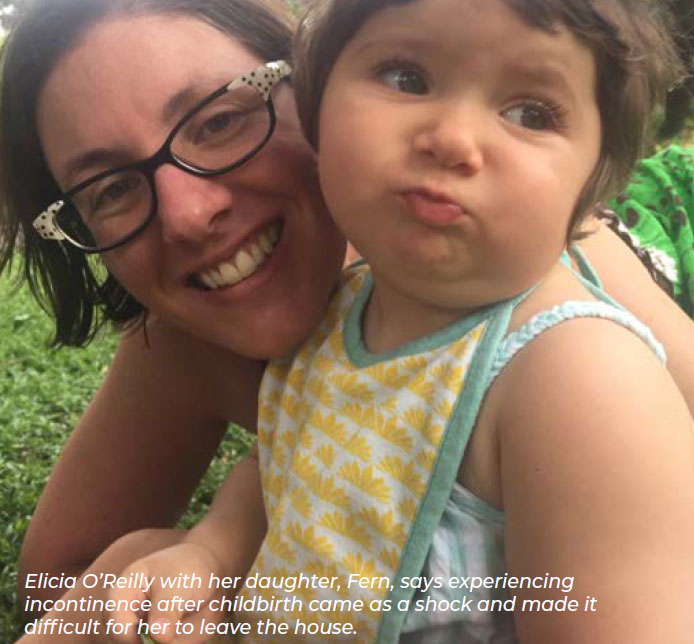 It wasn’t until a physiotherapist in the natal ward gave her a brochure “One in three women who have ever had a baby wet themselves” that she realised just how common it was but wondered why she hadn’t known about it. Elicia also questioned why, given the high prevalence, incontinence after childbirth wasn’t something women or health professionals openly discussed. What struck her was what she described as the “invisibility” of the problem.

Elicia saw a urogynaecologist, had diagnostic tests and began what can only be described as a long slow journey towards discovery and recovery. She says it was working with pelvic floor physiotherapists that brought everything together for her. So many people and health professionals are involved in the pregnancy and birthing process, but she laments that no-one really pulls the whole picture together for women. Pelvic floor physiotherapists helped to fill in the gaps in her knowledge and understanding and became a sounding board for her decision making. She realised they had a longer-term approach regarding post-partum recovery and were in there for the long haul.

Elicia acknowledges that childbirth is one of those experiences you can never truly prepare for but would like to see more discussion and information about incontinence. In her experience, there were too many barriers to finding and accessing the right information, a process she likens to learning a new language. "You need to understand the language you need to use before you even know the questions you should be asking!" she says.

Elicia thinks a common misunderstanding amongst health professionals when communicating the possibility of birth related injuries is that it might scare women, but in fact the opposite is true. 'Women are never upset about being overprepared, only underprepared,' she quotes from UK author Jessica Hatcher-Moore, whose book, “After Birth: What Nobody Tells You - How to Recover Body and Mind” was recently released in Australia.

Elicia would like to see women provided with more knowledge about the risk factors and likelihood of birth injury and how to deal with it. She uses the example of post-natal depression and how shared knowledge, and discussion has helped to publicly raise the profile of a topic that was until relatively recently not widely talked about. She would like to see the same level of awareness around childbirth injuries and birth trauma so that women have prior knowledge of the risk factors and know where to seek help and support.

Elicia says she didn’t grow up wanting to be the poster child for post-partum incontinence but is using her voice as a writer and mother to share her experience in the hope there is a shift in women’s health towards better education and informed decision making.

Ideally, Elicia would like to see a systematised and structured framework for teaching women about their bodies and the process from early pregnancy, during and post-partum so that women would know what they can do both before and after pregnancy to get the best possible outcomes. She proposes incorporating this into education early on in schools and making sure that boys are well informed too. 'Pregnancy and childbirth are hugely significant life processes and the better informed we all are, logically the better the outcome for all involved,' says Elicia.

Elicia O’Reilly with her daughter, Fern, says experiencing incontinence after childbirth came as a shock and made it difficult for her to leave the house.

For her pregnant friends and colleagues who seek out her advice, Elicia doesn’t hesitate to recommend they see a pelvic health physiotherapist before birth to be properly assessed and make sure they are taking the right care throughout their pregnancy as well as after childbirth. She knows the support is out there but needs to be made more accessible and visible to women and most importantly to reassure them they are not alone.

Phone the free National Continence Helpline 1800 33 00 66 to speak to a nurse continence specialist about bladder and bowel health.