As an Air Force veteran, Alan was never afraid  to speak his mind. This might explain why he  is comfortable talking to groups of forty or four hundred about his lived experience of incontinence. 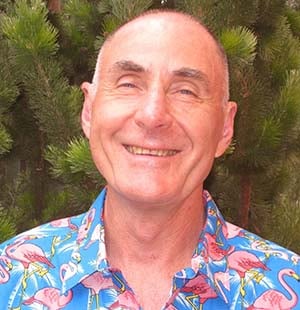 Alan has experienced incontinence since having his prostate gland removed in February 2010.  Alan remembers reaching a tipping point three months after the operation when he was sitting on the toilet, crying out of frustration because of incontinence. He has since seen a continence nurse/physiotherapist regularly to retrain his pelvic floor muscles, has gradually learnt what precipitates leaking (heavy lifting, alcohol, caffeine) and has adjusted his lifestyle accordingly.

Alan is a consumer representative for the Continence Foundation of Australia and is passionate about normalising the subject of incontinence in men, rather than being taboo. He is an advocate for the Foundation’s BINS4Blokes campaign, promoting the installation of incontinence product disposal bins in men’s toilets. He also speaks frequently at RoboCare, an information session for men about to undergo robotic surgery to remove their prostate, through the Peter MacCallum Cancer Centre.

During these sessions, he can share tips that he ‘learnt on the job’ with other men.

Alan’s message is: “Don’t be ashamed because nature doesn’t care; definitely do everything you can to support your pelvic health muscles, but the body will heal how it heals. If you’re still having issues twelve months down the track, speak to a urologist because there are medical interventions that may make a difference."

“It breaks stigma and gives men permission to talk about what would otherwise be described as secret men’s business” Alan White. "Don't be ashamed because nature doesn't care".

Alan believes councils should be encouraged to build unisex and accessible toilets with incontinence product disposable bins to help people with continence issues, and consumers must always be consulted in the design and plan of such toilets.

“Simple things such as signs saying ‘dispose of continence products here’ or talks at sporting clubs would also raise greater awareness, as would educating occupational health and safety officers around the issues experienced by those with incontinence. Medical centres can also stock brochures from places such as the Continence Foundation to help people know who to call and where they can find support,” he says.