From Adversity to Opportunity 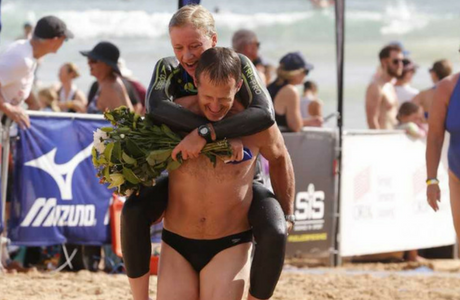 Anne-Marie Howarth was 31 years old when she suffered a motorbike accident which left her with a spinal cord injury, restricting her bladder and bowel control. Not to be outdone by her injury, instead it opened a world of new opportunities.

When was your motorbike accident?

It happened in 2005. I was on my learner’s licence and I’d only had the bike and my licence for four weeks when I took a corner too fast and slid out and hit a guard rail in the Blue Mountains. I sustained a T7 incomplete paraplegia as a result of that which resulted in a loss of bladder and bowel control. Because it’s incomplete, I have some control over my bladder and bowel but not enough to be particularly helpful.

Directly after the accident I spent the better part of five months in hospital, which is pretty standard for an injury like that. In hospital, they just put you on a Foley indwelling catheter and a bag, and while I was taught to use the intermittent catheters in hospital, I wasn’t really strong enough or fit enough to get on and off a toilet very easily to get my pants on and off.

How did you manage after you got out of hospital?

When I left hospital, probably somewhat prematurely, I had with me a Foley catheter and a bag and continued to use that for several months. Until I was fit enough and strong enough to change back to intermittent catheters which a lot of people with paraplegia use, but they were very, very expensive and I did the maths and realised if I keep using these for the next 50 years I’d be spending about $100,000 on catheters. I thought that was insane! It wasn’t until three years after my injury that I actually put action into doing something about it. I guess I was just waiting for somebody else to fix it, but nobody did.

How did you cope with everything when you left hospital?

As for coping when I got out of hospital, well just barely. I got out of hospital on the Friday, moved into a new apartment (on my own) that weekend and started back at work on the Monday part time. This was a lot for me – I could barely get my wheelchair in and out of the car at the time, and I couldn’t push very far – I was very weak and unfit. I was also in a great deal of pain. I lost a lot of weight, I was really very depressed for a few months there.

People were asking me if I was eating – I was trying. All of my friends at the time were skydivers too, and that had been how I was spending my weekends prior to the accident. So my social life largely disappeared. My relationship had already tanked. But after I while I got stronger, developed new routines, got used to the ‘new normal’. Eventually I started making new friends, found new interests and life slowly but surely improved.

How did you meet your husband?

Chris and I met at an ocean swimming event in Fiji in 2008. As it turned out, we had both flown over from Sydney for it. I actually started ocean swimming about two years after my injury – I’ve always been a swimmer, but I never thought I was fit or strong enough prior to my accident (which turns out to be ridiculous, but I didn’t know that then). Up until recently I would swim around three times a week. The distance would vary depending on what, if any, events I was training for – somewhere between 1-5km. This last summer I slacked off due to persistent shoulder problems, though I’m hopeful that I will get back to it in future.

What inspired you to start your own business?

I looked around at other countries and I could see that catheters were available more cheaply in the US for example. But there are restrictions on purchasing catheters over there because you have to have a prescription. And also if you import catheters there’s a cap on how much you can import – there’s an Australian Government restriction that you can only get three months supply.  And it’s a personal supply so that meant you couldn’t buy in bulk from overseas so there was just no cost-effective way of getting anything more cheaply.

And then I read if you registered and had a company then you could import them and I thought maybe I’m not the only one with this problem. So that’s where it started and I crossed my fingers and gave it a go. That was in 2010 – five years on from the accident.

What difficulties did you have to overcome?

When I set up the business I was working two jobs at the time, looking after websites. My husband was extremely supportive, but it was basically me running it so I’d basically have a bunch of catheters in a bedroom in the house, I’d grab some to go to work in the morning and go and deal with everything in the afternoon. A lot of people didn’t knowat the time but I’d go to work with a big sack on my wheelchair which was loaded up and I’d take it to the post office each afternoon. I’d sneak into the conference room at work and return customer’s phone calls. So I actually did that for the first three years in business, and then it just got out of hand.

At some point I got eParcel to come and pick up the parcels from my house so I didn’t have to drag them up to the post office because there were just too many of them. But the business has grown a lot since those early years – I now have staff packing and answering the phone. It’s a full time business for me now.

What’s your message of inspiration to anyone struggling through incontinence issues?

To get help for bladder, bowel and pelvic floor health problems, call the free National Continence Helpline on 1800 33 00 66 or talk to a doctor or continence specialist.