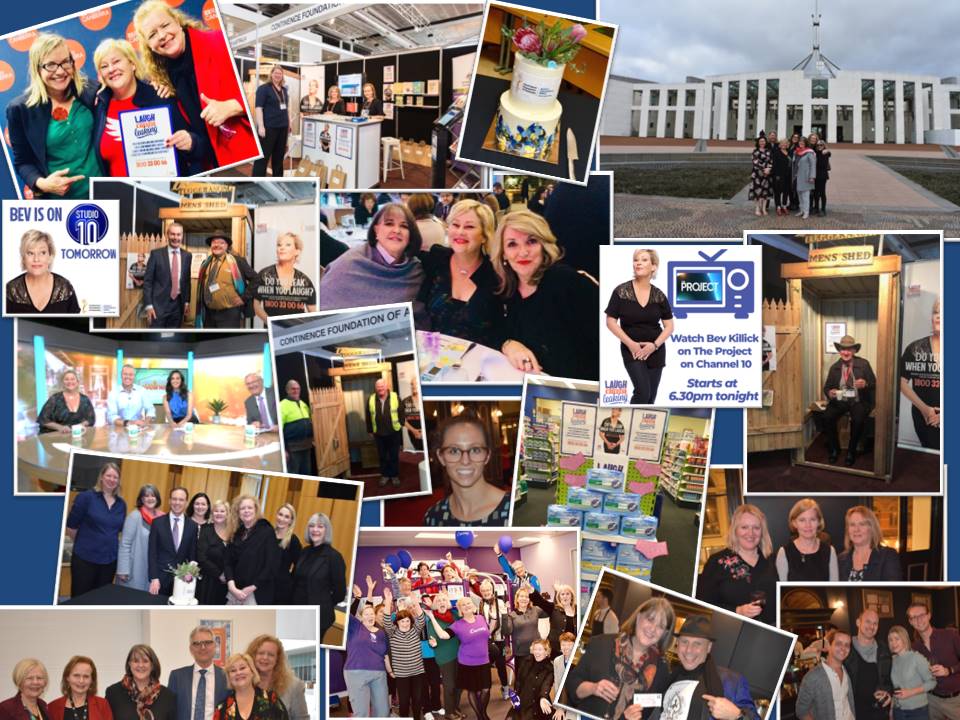 This year, we launched a major public awareness campaign in March, Laugh Without Leaking. It featured comedian Bev Killick, who has lived with incontinence her entire life. As part of the campaign, we created 43 new creative resources including; community service announcements for TV, radio, print, outdoor signage and digital media, a new campaign website, Continence kits with campaign posters and other promotional materials.

We enlisted the support of 23 major campaign partners to help spread the good news that the majority of bladder and bowel issues can be helped or even cured. The first step is asking for help.

In June, we headed to Canberra to officially launch World Continence Week (WCW) at Parliament House with Health Minister Greg Hunt and Aged Care and Indigenous Health Minister, Ken Wyatt. From 17 to 20 June, our classic Aussie dunny - constructed by our friends at the Tuggeranong Men’s Shed Association - made our exhibition booth at the National General Assembly of Local Government at the National Convention Centre in Canberra a popular WCW photo prop for the 800 mayors and councillors from Australia’s councils.

“Bev then attended a WCW event at Curves Fitness Club in ACT before jumping a flight to Sydney for more media appearances whilst some of our national staff headed to the West Coast for another WCW event at His Majesty’s Theatre in Perth during the opening night of the Melbourne International Comedy Festival Roadshow,” said CEO Rowan Cockerell.

It was terrific to see so many members and stakeholders embrace World Continence Week. We were thrilled that there were 1,431 events, activities and displays held across Australia and we sincerely thank all of the organisers and those who attended the events.

Bev along with our health expert and consumer media spokespeople were in high demand for media interviews, featuring on every major TV network, as well as radio, newspapers and online publications across Australia. They helped us attract 492 media stories, an outstanding result.

Our total campaign audience reach was 134,214,880, making it our most successful ever.

“We are enormously grateful to our members, campaign partners and supporters and we are looking forward to hearing your ideas for future years,” said Mrs Cockerell.