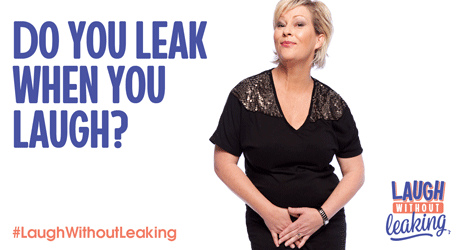 A new campaign launched today by the Continence Foundation of Australia reveals that the majority of bladder and bowel troubles can be helped or even cured.

The Laugh Without Leaking campaign  uses comedy to take the stigma out of incontinence and urges the 1 in 4 Australians who live with bladder, bowel and pelvic health problems to ask for help.

“It is a massive problem affecting over 5 million adult Australians and costing the Australian economy more than $67 billion a year,” says Continence Foundation of Australia CEO Rowan Cockerell.

“We know that many people laugh off their leaking as a normal part of getting older or after having a baby. But it is not normal and has a serious negative impact on daily life for millions of women, men and children. “

“Don’t put up with it! The good news is that you can quickly change your life for the better. Most bladder and bowel problems can be better managed, better treated and, in many cases, even cured without surgery. The first step is asking for help,” says Mrs Cockerell.

Laugh Without Leaking Ambassador, actress comedian Bev Killick, says she knows from personal experience that living with incontinence for many Aussies is no joke.

“I have been getting a lot of laughs at stand up shows in my new role as the Comedy Queen of Continence. As a mother and a comedian, I know what it is like to have a ‘wee accident’ when you laugh, sneeze, cough or jump. Sadly, my trampolining career is on hold,” says Bev.

The Laugh Without Leaking message is quickly spreading across Australia with the support of comedy shows, councils, libraries and schools.

“To help spread the good news that help is here for people living with incontinence, we are delighted to have partnered with the Melbourne International Comedy Festival, Australian Government Department of Health, The Shannon Company, Australian Local Government Association and Australian Libraries and Information Association,” says Mrs Cockerell.

Laugh Without Leaking features new community service ads on TV, radio, print and online as well as a social media campaign in search of the best toilet humour in the country, with prizes of double passes to the Melbourne International Comedy Festival (28 March – 22 April) and the Melbourne International Comedy Festival Roadshow as it journeys across Australia for three months from early April.